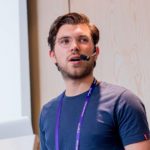 Life after Redux: Handling State-Management in React with Context and Hooks

The Context API was a “problem” for long time as it was considered unstable, however it was being used by the #1 solution of large-scale state-management in React – namely Redux. The React core-team has stabilized Context to be used publicly, while with the release of Hooks this Context can be changed easily.

This talk will transition from explaining the basic concept of immutability and state-management to using Context, to using Context with Hooks. and finally comparing the concepts with Redux. You can expect code examples, live coding and everyone should be able to understand the concept of Context and at least the useReducer Hook.

For every React developer this is interesting as hell, as it shows solutions for both local state-management and large-scale state-management. AND this is all React, no additional packages needed!